Launchpad offer a wide and varied range of community projects.  We are very happy to produce tailor made packages to suit our client’s requirements.

Please contact us if you would like any further information about the type of projects we can offer.

Autumn 2019 - We really enjoyed hosting our Pre-schooler Halloween Party in association with BS3 Community.  We shared lots of Halloween themed crafts and activities with the 25 families that joined us.  This event was supported by BS3 Community

Spring 2019 - Launchpad enjoyed working with Solon Housing for the third year in a row!  It was great to meet lots of Solon residents for this year's Easter art activities.  This project was funded by Solon Housing.

Spring 2019 - Launchpad worked alongside Avon Fire and Rescue to run an event at Temple Fire Station.  The event helped promote fire safety in the home and linked with our pre-school class topic of 'people who help us'.  Thank you to Blue Watch for all your support!

Winter 2018 - Launchpad worked in collaboration with Acting Out to produce 'a play in a day' for the fourth year running.  This year's pantomime was Peter Pandemonium.  It was another action packed day, finishing with a fantastic performance from our amazing cast.  You can watch a time lapse video of the day here.

Spring 2018 - Launchpad attended the Southbank Arts Trail for our fourth year at the Southville Centre.  It was another busy year of fantastic art!  This project was part funded by the SBA.

Winter 2017 -  Launchpad worked in collaboration with Acting Out to produce 'a play in a day' for the third year running.  This year's pantomime was Aladdin BS3.  We had a cast and crew of around 60 children and adults.  We are so proud of everyone and the performance!

Spring 2017 - Launchpad attended the Southbank Arts Trail for our third year.  We had beautiful sunshine in the Southville Centre Garden.  We loved sharing a huge range of art activities with all the children.  It was a super busy weekend and lots of fun!  This project was part funded by the SBA.

Spring 2017 - Launchpad worked with Solon Housing during the Easter holidays.  The children's art activities on offer aimed to bring the Solon community together at a series of events.  We had lots of fun creating Easter and spring themed art with the children.  This project was funded by Solon Housing.

Winter 2016 - Launchpad worked in collaboration with Acting Out to produce 'a play in a day' for the second year running.  This year's pantomime was Southville Cinderella.  The play, costumes, props and scenery were all produced in just one day ready for the evening's performance.  We had a cast of over 50 children and adults and the performance was a sell out!  Please take a look at our photos here: Southville Cinderella pictures

Autumn 2016 - Launchpad worked with children in years 4 and 5 at Compass Point Primary School.  This project aimed to promote and encourage the use of the 'Green Man Route' which is one of several routes in South Bristol that have been created to encourage walking.  Launchpad lead a walk along the Green Man Route to St John's Churchyard.  Here the children completed a variety of art activities including sketching the Green Man sculpture.  They also learned a little about the history of the local area.  Following this trip the children went back to school and each child had the opportunity to paint wooden leaves which are now hung along the Green Man route as markers.  The children were then asked to produce drawings of their own Green Man faces.  Twelve of these designs were chosen so that the children could then produce clay gargoyles with the help of Launchpad and Pottery on Wheels. These were then fired and glazed and will take pride of place along the Green Man route.  This project was funded by Bristol Green Capital.

Summer 2016 - Launchpad worked alongside Avon Fire and Rescue to run an event at Hicks Gate Fire Station.  Activities included a tour of the station, badge making, fire safety talks, a look around the engine and an opportunity to squirt the hoses!

Spring 2016 - Launchpad provided a wide variety of art activities as part of the Southbank Arts Trail.  We enjoyed two beautiful sunny days in the garden at the Southville Centre sharing activities that included fabric painting, collage, face painting, printing and water colour painting.  This project was part-funded by SBA.

Spring 2016 - Launchpad worked with Sustrans and Solon South West Housing Association at Grenville Chapel.  Launchpad ran a craft workshop for the residents of Grenville Chapel which included decorating their new secure bike racks. This project was funded by Sustrans.

Winter 2015 - Launchpad and Acting Out teamed up for the first time to produce a 'play in a day'.  We worked with a cast of nearly 50 people with an age range of 6 to 60.  Our challenge was to produce a panto in just one day...acting, props, costumes, set.  We had so much fun with everyone and enjoyed sharing our play with an audience of over 90!  You can watch a video about the workshop produced by 'Made in Bristol' here.  Many thanks to everyone who worked so hard to make the day a success.  Special thanks to the Southville Centre and 'In the Pink Catering' for their support.

Autumn 2015 - Launchpad worked with two year 4 classes at Headley Park Primary School.  We led sessions in the morning to discuss the 20mph speed limit including the pros and cons of the project.  In the afternoon the children were invited to produce banners for a parade and make musical instruments.  This project was funded by Bristol City Council.  Please click here for the ITV news article.

Summer 2015 - Launchpad provided an art workshop for 5-11 year olds and two pre-school sessions at Scrapstore in their brand new space 'Room to Play'.  We are looking forward to sharing lots of great projects with Scrapstore in the future!

Summer 2015 - Launchpad worked with children from Southville Primary School to produce 45 clay daisies.  These will be used to mark the 'Daisy Route' that runs through Southville and Bedminster.  This project was funded by the Neighbourhood Partnerships Green Capital Fund.  For more information about the Daisy Route please click here  For a picture please click here.

Spring 2015 - Launchpad provided children's art activities at the Southville Centre, Southville.  This formed part of the Southbank Arts Trail and was also a successful fundraising event for Parkinson's UK.

Winter 2014 - Lantern Parade.  Launchpad worked with years 3 and 4 at Southville Primary to produce some fantastic lanterns for the 2014 Bedminster Lantern Parade.  With thanks to the parents of these children and the organisers of the lantern parade for all their hard work too! Click here to view photo

Autumn 2014 - Clay minibeasts.  Launchpad worked with the Southville Centre's Holiday Club to produce small clay minibeasts.  These were then glazed and fired and 'hidden' along the 'Daisy Route' in Bedminster and Southville for children to find.  This project formed part of 'Let's Walk Bristol' and was funded via the Greater Bedminster Community Partnership.

Spring 2014 - Wooden daisies.  Launchpad took part in a community event in Dame Emily Park.  Adults and children were invited to paint wooden flowers.  These were then hung along the new 'Daisy Route' in Southville and Bedminster.  This project formed part of 'Let's Walk Bristol' and was funded via the Greater Bedminster Community Partnership.

Spring 2014 - Robot bunting.  The bunting had a robot theme and was produced for the Southville Centre.  It was hung outside the centre to promote the Southbank Arts Trail.  The bunting was made by the children from Launchpad Art Club. 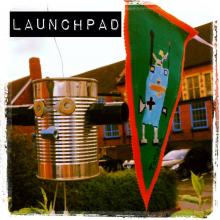 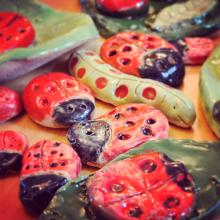 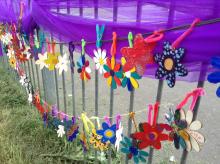 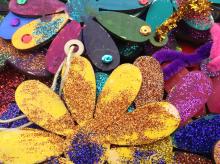 "Adele and Emma are always warm, patient, and inspiring to the children, and they obviously love what they are doing."

"It was a pleasure to work with such lovely, creative and organised people."

"We had a fab afternoon exploring colour with Launchpad. The activities were well planned and resourced. Everyone had great fun!"

"Adele & Emma have a professional and adaptable approach and they work hard to tailor-make fun activities appropriate to each customer or audience."

"It's been a pleasure to work with Emma and Adele"